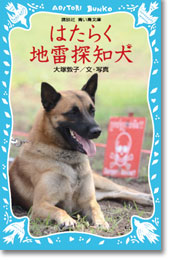 In the summer of 2007 I met two puppies in Bosnia and Herzegovina who were being trained to become mine detection dogs. After they completed their training I followed them to Cambodia, where they were sent to work in the mine fields. This is a four-year documentary for young people about the work of those mine detection dogs, and about the Cambodian people’s effort to demine and restore their war-torn land, and ultimately, to reclaim their country.