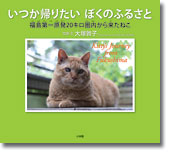 This is the true story of a cat who was abandoned in the evacuation zone after the explosion of Fukushima Daiichi nuclear power plant. Kitty, the cat, narrates the story of what happened to the people and animals in the nuclear disaster zone. I adopted Kitty in January of 2012, six months after he was rescued from the contamination zone.  Since then I’ve made several trips into the nuclear no-go zone, accompanied by both animal rescue volunteers and by my cat’s original family, and I’ve photographed the world hidden inside the zone.  I saw life thriving in nature without the presence of humans, and I saw lives lost due to human activities. The Fukushima disaster raises many questions about our proper role on Earth.