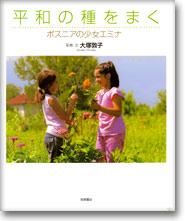 The war in Bosnia claimed as many as 250,000 lives and displaced 2 million people during the period between 1992 and 1995. 11 years after the ethnic cleansing, the country’s ethnic division still remains. However, it does not stop an innovative peace building effort called the Community Gardening Association of Bosnia and Herzegovina. In their gardens, people meet, work together, and form friendships regardless of their ethnicities. 11year old Emina, a Bosniak, meets another girl, Nada, who is Serb, and they become best friends. Emina’s love for Nada makes her wonder why there was ever a war in the first place, and she starts to explore how she could prevent war from happening again so that they would not be forced to become enemies. . .